The Monastery of Arkádi constitutes a landmark of architecture and civilisation considering the magnificent façade of the church, 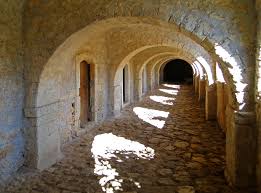 The highly developed spiritual tradition as well as the flourishing development of fine arts. However, the holocaust, which took place in 1866, gave the monastery an eminent place in history, elevating it to an eternal symbol of freedom and heroism, which is acknowledged the world over.

The Monastery of Arkadi lies on a low plateau, 23 kilometres from the town of Rethymno.
Built during the last Venetian period, it consists of a large set of fortress-like buildings. The main building included the cells, the warehouses where the agricultural products were treated and stored, the stables. In a word, it was a well-equipped little fortress where people could find refuge in times of trouble.

The elaborate central entrance was restored just four years after the 1866 explosion. It leads to the interior court, through a vaulted passage. In the middle of the court, stands the impressive church, with its two naves dedicated to Saint Constantine and Saint Helen, and to Our Lord.
Completed in 1587, its façade clearly shows the different currents in the development of Cretan art during the 16th and 17th centuries.
In the south-west corner of the church, one can still see a section of the burnt iconostasis that survived the 1866 holocaust.
The church is surrounded by a large and roomy precinct and the vaulted passages with their row of arches have retained their grandeur. The cells on the three sides of the court and the communal rooms on the north side are impressively austere.

The history of the monastery goes back to Byzantine times, when a monk, possibly named Arkadios, founded the monastery which in turn was named after him.
Already in the 16th century the monastery played an important role in the cultural life of Crete. There were many copyist monks, a rich library and a school.
The Turkish invasion reduced its cultural activities for a while, but the Arkadi Monastery was able to recover promptly and received a unique privilege among Greek monasteries: the Turks allowed the ringing of its bells.

The gunpowder storage room of Arkadi Monastery
The monastery proved to be not only a remarkable cultural centre, but also played an all-important role in the fight against the Turks: when the Turkish Army (15,000 men) surrounded the monastery in November 1866, 300 fighting men and 600 hundred women and children had taken refuge in it.
When the walls came tumbling down and the Turks began the massacre, one of the rebels, Kostis Giamboudakis, blew up the powder magazine and the sky-high explosion reduced the monastery to a pile of rubble. This heroic feat is considered one of the greatest in Cretan history and has turned the Arkadi Monastery into one of Europe's Monuments to Freedom. There's a museum in the monastery with many impressive relics of the 1866 Holocaust and some beautiful icons.
Many efforts have been made for the restoration of the monastery in the last years.
Two monks live there.
2016